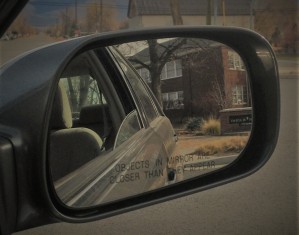 What is unemployment? If no one tells you that you’ve lost your job, are you really unemployed?

Generally speaking, the cessation of payment is a strong indicator that one’s job has been terminated.

Notification is a different story. I, for example, notified myself of my own impending unemployment. In February 2017, my husband, a full-time boarding school teacher, did not receive a renewal contract, so I, a part-time teacher and his partner, by extension did not either. My supervisor (the administrator responsible for contract renewals) did not discuss the matter with me, in person, in writing, or via email. I officially found out well after my peers did, in an email sent from the school’s business manager, who attributed the dissolution of my job to a lack of/low enrollment in the 7th and 8th grade student body. He intended, I think, to soften the blow: It’s economics, Jules. It’s not personal.

My employee evaluations were solid, and I completed every task asked of me (even the uncompensated ones), surpassing the requirements expected of part-time staff. I believed that my supervisor and I were on amicable terms, and, for several weeks, my confidence bolstered by favorable comments from the school’s higher ups, I reserved hope that I could continue working at the school in another capacity – potentially allowing my family to remain situated in the same house and community – until the time came when I realized that would not be the case. It felt intensely personal. People have disappeared from my life before, but for an employer to do so was a novel first.

I heard you moved. Where are you now?

In the fourth quarter, the school administration raced to disassociate from my family, and we reciprocated, vacating the faculty house in which we’d spent that last nine years, cleaning and preparing it for its new tenants within 36 lightning-quick hours. I documented the process on social media, using captions such as The Purge, The Big Move, Good Riddance, and, on a particularly bad day, Our Former Employer is Satan.

We took the carport and the trampoline, which we’d purchased, and dismantled the monkey bars we’d built, giving away the wood to friends for tinder. We left no trace of ourselves. Many coworkers – those with whom we’d worked and laughed, and broken bread, and raised our kids – didn’t blink or say goodbye. They avoided eye contact in shared workspaces. They drove by our house, and they watched us mop sweat from our faces as we carried load after load of pieces of our life to the ever-growing dumpster. They heard us cry on our front porch and try to diplomatically rationalize the school’s motivations to our children, who responded with greater maturity than we could have imagined.

It took several weeks to secure a rental property, during which time I slept little and fought nightmares. Ultimately, a neighbor took pity on us and agreed to rent us his house. Half a dozen school families, whose students my husband and I had taught successively, pledged to help us on moving day. When that day came, two of twelve “definites” showed up.

What is the hardest part about being unemployed?

This question has no single answer. Answers vary widely depending on experience and circumstance. My biggest challenge has been the shunning from former “friends” because it bleeds into so many different aspects of daily life: basic social courtesy, traditions, the definition of a functioning community. Our discontinued status at the school renders us invisible to our peers. Even today, when I encounter a former coworker at the library or the grocery store, most wince and/or avert their gaze, stumbling backwards to increase the physical distance between us. I offer them a smile and a greeting while seething inside. I used to think of myself as part of a great community, but it was only a construct of my imagination.

Why take a gap year, at your age?

Though we aren’t high school students trying to find ourselves before committing to a college path, the spirit of a gap year suits our current situation: we wanted to find out what to do next. My husband and I considered ourselves “lifers” at our former school. We were committed to the school’s mission and hoped both to teach our own children and to see them learn with esteemed coworkers. We dreamed our kids would matriculate from the school. The school did not return our loyalty. My husband and I found ourselves in middle age, rootless and directionless, reevaluating what we wanted from the next chapter of our lives.

Of the five major life stressors that jeopardize the stability of individuals and families, leaving the school confronted us with two: moving and starting a new job. (The other three stressors are the birth of a child, marriage, and death.) We didn’t want to act out of desperation: take last minute jobs in a random city that we might end up despising, only to job search and uproot again the following year. A hasty move compounded by a second hasty move seemed like a fast track to a lot of bad juju, and a costly one at that, so we made the decision that best supported our family’s needs. We have yet to discover whether we made right choice or not.

How can you afford a gap year?

My husband and I have been continuously employed since we were teenagers. In the last decade, I’ve held multiple jobs at once, concurrently freelancing, tutoring, and teaching to maximize my revenue. We agreed early on about the necessity of long-term financial planning and we’ve been aggressively saving and investing ever since. Rather than acquire additional debt, we subsidize unemployment payments by cannibalizing our retirement fund, playing a game of risk with our security net.

What are the benefits of taking a gap year?

If money was of no concern, my husband might never return to teaching, because he relishes his newfound liberty. He sleeps in late and stays up until the earliest morning hours playing video games and reading. He speaks his mind and eschews shaving. Sometimes he doesn’t leave the house. And he’s okay with it.

I have also benefited from a certain freedom. My former self, who I’ll call Teacher Julia, used to do battle on weekdays – nag the kids to move quickly so I could drop them off at school, rush to the dining hall to inhale reconstituted eggs for breakfast, and hustle to the classroom for a precious hour of prep before the teaching day began. I graded student work feverishly, my eyes attuned to when the clock struck 3:00. My children came home and the battle continued: urging them to do their homework while I finished gathering materials for the following day’s lessons, losing patience when they had questions and needed help. Did I ever stop to say thanks that my children had returned home safely one more time, or take a break from working long enough to hug them and breathe in their warm, syrupy hair?

While my husband’s drive for intellectual inquiry will eventually propel him back into the classroom, this Gap Year has shown me that I don’t want to go back to being Teacher Julia. She was not a happy person or an attentive mother.

Until one (preferably both) of us finds a suitable job, we carry on as usual, accomplishing much the same daily chores and obligations we used to, albeit with much less stress. I send the kids off with kisses every morning and wait eagerly to see their bright eyes as they come home in the afternoons.

What are your goals/objectives for life after the Gap Year?

Have you reached a place of acceptance?

Friends have likened leaving the school to escaping from a destructive relationship: you don’t know how bad it was until you get away from it. In our last year of teaching, the school’s motto seemed to be The beatings will continue until morale improves, or, as Harry Potter’s Aunt Marge says: “A good thrashing is what’s needed in ninety-nine cases out of a hundred.” We saw (and experienced) countless random outbursts and rash, demoralizing criticisms. A change to the administrative roster caused ripple effects – thrashing upon thrashing – that led to roughly one-third of the school’s faculty being let go or voluntarily opting to seek employment elsewhere for the 2017-2018 academic year. In hindsight, it was time to walk away from a rapidly souring romance. We weren’t the only ones who did.

Thanks especially to MO, FM, and RD for the kindnesses you showed us when kindness seemed in short supply; and to all the friends, near and far, who stood by us during the painful transition. We are very grateful for your support!

A couple weeks ago, my husband stopped me in the hallway at the school where we teach to tell me that he wasn’t receiving an employment contract for the upcoming academic year. By extension that meant I wouldn’t receive a contract either; we came to the school as a package deal and will leave as one, too. As a part-time Humanities faculty member, I was already keenly aware of my expendability. My husband’s news, however, came as a surprise. I felt like throwing up, but I did what an adult does: I pasted a smile on my face, returned to my class, and finished out the day’s work. Then I drank the weekend away.

Unemployment is a stress in itself, but, at a boarding school, it carries an additional wallop: eviction. We live in a faculty house and must vacate it, and our positions, by June 15. My family has four months to figure out many things: where we will work, where our children will attend school, where we are going to live, and what steps will cause the least damage to us as individuals and to our family unit.

My husband and I waited a week before telling the kids. Though it would have been easier to bear the heartache and spare them, we didn’t want to risk them hearing the news from one of the other faculty members or their children. (In this small community, news travels fast.) My son was four when we started working at the school, and my daughter stood as tall as my knees. This is the only home the kids have known. They cried, we cried, and we all went to bed with nine years of memories to either mourn or savor. When we woke up the following morning, we watched the sun rise into a crisp blue sky.

I will not miss this job. It has demanded my creativity and sapped my patience. It has killed my love for young adult literature. I may miss the unique relationships I’ve built with young learners, but I won’t miss the grading, the superfluous, unproductive faculty “workshops,” or the hours of planning. This job has always been a job, not a calling, and I accept its end for the possibilities and potential it unleashes.

I feel buoyant, despite the chaos. This experience is an open door. I intend to walk through it with my head held high.