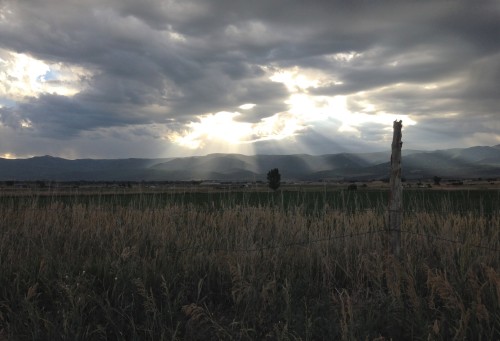 My family has made rural, central Utah home for the last ten years. We moved here for work but were not strangers to the state: my husband and I both attended Utah State University, and I’d been bouncing to and from the West (and my father) like an errant ping pong ball since I was a baby. In 2017, our employer blindsided us with what felt like banishment from the small life we’d created, and we spent all of last year determining what our next steps would be. Now we know that our careers are taking us to southern Florida. My husband and I are ecstatic with renewed purpose. Our children can’t wait to dip their toes in the Atlantic. As Hawthorne wrote, “Times change, and people change; and if our hearts do not change as readily, so much the worse for us.”

My heart accepts the challenge, but feels a little uneasy standing on the threshold of such a major life change. Utah has irrevocably altered my internal landscape, fortifying me with a Western spirit: big and plucky and fond of long rambles on bluebird mornings. I have found so much comfort in Utah’s liberating solitude. Leaving feels like letting go of a very dear friend. 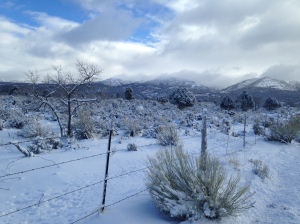 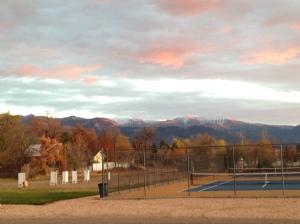 Goodbye, dusty backroads and the realizations we came to together. 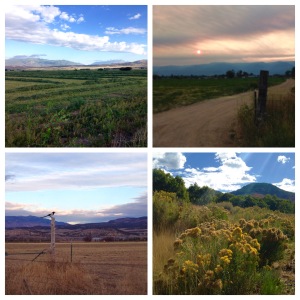 So long to campfire s’mores under luminescent star-filled skies at Fish Lake and cowboy coffee gurgling in dented tin pots as friends slowly emerge from their tents, yawning and stretching, in the desert sun.

To all the sounds that fine-tuned my focus – the high-pitched chirps and squeals of marmots, killdeer, and eagles; cattle lowing in the distance; the riot of starling wings, unfurling in ribbons along the fence line; geese honking in broken v-formation; skunks rustling in tangled, verdant undergrowth; the trickle of alpine streams and the roar of surging rapids – I will miss you. A respectful farewell to the state’s pioneer spirit, which seeps into the bones like minerals in warm springs, making pilgrims out of the unlikeliest souls. Thank you for an epic decade. Our lives here have been like a dream from which, even as we move forward, it is extraordinarily difficult to wake.

Winter seems to have returned to central Utah. During several weeks of unseasonable warmth, grasses started to green and tulips threatened to unfurl from the dry soil. Tiny buds sprouted on the Chinese elms outside the house. We wore short sleeves and flip-flops, dabbing sweat from our brows. One exasperated friend took down all of her winter decorations, grumbling, “We haven’t even had the chance to make snow angels this year!”

I read updates from Boston, New York, and Chicago, and I cringed, not daring to draw attention to our weather situation while friends back East cursed the onslaught of yet another snowstorm. Locally, we scratched our heads and said things like, “Well, we can’t complain about this!” and “This is incredible! It’s not January, it’s April!” But also: “What the hell is going on?” and “This summer will be awful!” Snow enthusiasts, lovers of nature, gardeners, and farmers alike implored the meteorological gods to return the snow to us. And, finally, last week, they did.

For me, the “heat wave” highlighted our dependence on the weather, the intricate web of causality that affects us where we live. Little or no snow in the high desert transforms the mountains into giant tinderboxes, acres and acres of trees ready to catch fire. Lack of snowmelt threatens the water supply, which impacts those who depend on water to grow their crops as well as those of us who don’t. No water means fewer foods to eat. The town grocery store posted a sign warning customers that, due to weather circumstances throughout the country, certain produce items may be intermittently available, if at all, which is of grave concern since my diet consists mainly of things that grow in the earth. We may have enjoyed a reprieve from the cold, but at what cost?

I worry when my region experiences summer in January and icy hailstorms in July. It distresses me when weather abandons seasonality and instead becomes a series of events and vortices. Shouldn’t changes in the atmosphere – isolated incidents, established patterns, and troublesome anomalies – warrant more consideration than just “small talk”? Every day I watch the sky in humble estimation of the greater forces in control.

On Monday, the winter gods rewarded our pleas with a dusting of light snow: just enough to sprinkle our shoulders as it melted from the trees; just enough to mute the ubiquitous brown sagebrush. We awoke the following day to a world in white. I think – I hope – that higher slopes are receiving even more snow. For this bounty, we bow our heads in gratitude and beg, “Please send more!”

Once upon a time in a quaint farm town…

“Words are, of course, the most powerful drug used by mankind.”
– Rudyard Kipling

Once upon a time, in a quaint farm town, there lived a community much like that of any other small town. While the sun crested the high alpine peaks, residents prepared for their days, readying for work of one kind or another, inside or out of the home. Children rode their bicycles to the elementary school. Birds chirped as farmers loaded aging pick-up trucks with hay bales and feed. Cars passed through the town’s only stoplight, heading north to more prosperous cities and south to larger towns: stop, go, stop, go.  And each day, a shadow coursed along in pajama pants, jittering, thrusting her hands, visible one moment and gone just as quickly, as if to convince onlookers she was never really there at all. Except, she was.

I can only speak for the town in which I live, but it’s not a stretch to imagine that addiction addles other communities as well. His face and temperament might vary, but he wears a similar outfit wherever he roams: an overcoat of hole-filled secrecy, shoes worn thin from tireless searching for the next fix. Whispers follow him, though few care to look him directly in the eyes. In my town, his name is Meth. He has an alarming number of friends.

As children, we’re warned not to do drugs. Our parents admonish us, as do schools and billboards. Culturally, however, we do drugs all the time, often in multiples, each one yielding a specific desired result: pain killers, anti-inflammatories, allergy relievers, anti-depressants, contraceptives, cholesterol lowering agents… Drugs are commonplace and abundant. People use them for leisure, for pleasure, to improve quality of life; others take drugs out of necessity, medical or otherwise. Into our bodies they go, dissolving into the bloodstream, workhorses for end goals. The distinction, then, isn’t that we should abstain from drugs, but that we should avoid the drugs with the potential to destroy us.

Problems are easily overlooked when the user has no name, but, in this small town, it was only a matter of time before I would see (and know) my first before-and-after. I encountered her a few weeks ago, hastening along Main Street, eyes bulged, punching the air around her head, cigarette in hand. Did she recognize me? Did she catch my wince before I looked away? Did she register my shock at her haggard appearance? Growing up in Brooklyn accustomed me to unanticipated doses of fright, but it seemed unfathomable that the girl before me was the same girl I remembered from just last year. Today, she is a wiry, crackling, frayed piece of electricity paying a dear price for her pleasure.

One of my friends has a strong background in drug and alcohol counseling. Lacking first-hand experience, I consulted with him to round out the research I’d done online, and what he told me helped me understand meth usage from a neurological perspective. Basically, meth floods the brain with dopamine (a chemical tied to motivation and reward that makes people feel really good) for a much longer duration than we usually experience from doing other activities that make us feel good, like eating good food, having sex, or working out. Its biggest danger, he explained, “is that it makes other activities seem pointless by comparison…. When the animal part of our brains know that with a phone call and a quick injection we can feel incalculable pleasure, it makes putting in the effort for going for a run and feeling a little bit better seem like a much less satisfying option. We tend to take the path of least resistance for the highest gratification.”

I am an outsider to the world of illegal drugs, but addiction is relatable, because it spills into alcohol, tobacco, exercise, food, creative expression… anything, really, that promises the chance of happiness or fulfillment. Social pressures, genetic inheritances, and slick marketing conspire to weaken resolve.  I understand the human appetite for pleasure.

Utah has its highlights and its struggles. As a non-Mormon, I will forever be a minority, a member of the 30% fringe, though I attended college here, live and work here, and, as the only child of my parents’ union and subsequent separation, have enjoyed the state’s natural offerings every summer since I was a baby. Countless observations have shown me that ice cream satiates (and palliates) the appetite of the state’s majority, who abstain from hot tea and coffee, alcohol, and tobacco – and vice in general – as a religious and moral imperative. Ice cream is obviously not a drug, but any child can tell you that its sweet creaminess has its own mood-altering effects.

The state has also been scrutinized for its high use of anti-depressants. Some contend that residents are more likely to seek medical assistance because they are forbidden to imbibe in the substances that others typically use to elevate moods, legally attainable or not. An entry in the Mormonism Research Ministry suggests that the pressure of striving for perfection could potentially lead to higher rates of depression. I think winter and relative isolation work in tandem to foster sadness. Winter days crawl along, prolonged nighttime encrusted in snow. Salt Lake City, with its dense population, experiences a thermal inversion that blots out the sun with a dense layer of smog for days and weeks. My town does not experience the inversion and is, for the most part, blessed by crisp, blue skies, but the days are so very lonely and hollow, making the world feel too small at times. How we cope varies. Pleasure is pleasure, and we seek it in whatever ways we can.

The minority fringe blisses out on caffeine in the form of tea and coffee, as does a large part of the overall global community. According to Harold McGee’s On Food and Cooking, caffeine is a “behavior-modifying chemical” that “stimulates the central nervous system, relieves drowsiness and fatigue, and quickens reaction times.” And yet there are no awareness campaigns or recovery programs for caffeine addicts. Those who quit consume other, easily acquired drugs until the jitters, headaches, and cloudy irritability pass. The Coca Cola website tells me that there are “34, 750 ways to describe” how the popular beverage makes a person feel.  In 2009, the soda’s motto was “Open Happiness.” Who wouldn’t want to drink in happiness if that was all it took?

Once upon a time, in a quaint farm town, there lived a writer who recoiled in the raw face of addiction. Her shock unnerved her. Her mother’s family had lost brothers and uncles to alcoholism. She remembered sneaking outside to smoke in high school and college: those dizzying, intoxicating first drags. She felt the beckoning warmth of a morning cup of tea, black and sweet, radiating against her cupped hands. Even her chosen field of interest condemned her: musings on food and drink, near obsessive in tone, for which she held – and still holds – such reverence. She had peered into the frenzied blue eyes of someone who might under other circumstances be her friend and judged, only to recoil at herself, deeply ashamed by her reaction.