The sky over Banderas Bay is still heavy with gray clouds from the previous day’s storms when my friends and I embark on our last adventure in Puerto Vallarta. Cool air greets us, a respite from late summer’s humidity; the ocean murmurs behind us. We climb cobbled streets to meet our guide, Fernando, at a nearby OXXO, a convenience store chain with ubiquitous presence all over the country. Early morning traffic whirs along the road. Fernando waits for us next to his air-conditioned touring van. He dispenses warm hugs and hellos. We board the van, eager to leave the city for a morning with the birds. “Let’s go, girls!” says Fernando, blue eyes smiling.

The drive to El Tuito follows coastal Manzanillo highway 200 and veers southward and inland at Boca de Tomatlan, climbing from sea level into oak and pine country. Fernando inquires about our lives and professions, while providing little windows into his path from Mexico City to cetacean studies and Puerto Vallarta. We are all educators, so we describe boarding school life and offer statistics about demographics. (I don’t mention that I am a newly-minted former educator because the wounds to my ego are still fresh. My friends kindly uphold my omission.)

We spend all morning in the temperate mountain region, relishing the clearing cloud cover and a break from the heat. At over a thousand feet above sea level, the air hums with sound: the buzzing, chirping, and chittering of creatures that thrive in tropics. Fernando spots birds from barely perceptible movements in the abundant, green canopy, and he shuffles our bodies and our lines of vision to accommodate seeing what he sees. Within minutes, we’ve spotted nearly a dozen different birds, among them a male blue-black grassquit, small and, appropriately, bluish-black with white spots in the crook of its wings. Fernando, who warned us at the outset that he was a serious “bird nerd,” puffs with joy. “Look at him!” he says. “Watch… He will jump to announce his territory.” Sure enough, the grassquit bounces in place, a single spindly branch propelling him upward: Here I am! Look at me!

In the distance, a black-bellied whistling duck alights on a tree. Fernando says: “Quick! Two o’clock!” The group pivots as one, binoculars at the ready. The duck has large, ringed eyes that give it an inquisitive appearance, and long legs that match its bright coral bill. It is cuter than the average dinosaur’s descendant.

We drive further inland to Rancho Primavera, a destination known for its birding opportunities. Heavy blushing mangoes dangle from grove trees. Unseen birds entice us with birdsong. The caretaker’s dun-colored dogs follow our trek through the grass. Fernando whistles a series of staccato pygmy owl toots and, in turn, flushes out a cinnamon hummingbird, which we track as it zips through undergrowth. As if on cue, Fernando points to a blue-capped motmot resting on a low branch. It fixes us with its red gaze. We coo.

A male elegant trogon, resplendent with a brilliant red breast and shimmering green body, flits through high branches near the lagoon. It holds a moth in its beak; the moth’s wings flap wildly. The trogon divides its attention between us and the insistent call of a nearby female, reluctant to reveal the location of its nest. We turn to leave, and the trogon disappears from sight. 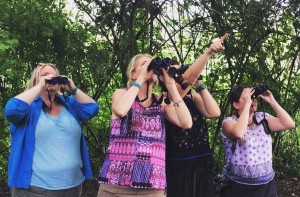 Photo Credit: (Who else but) Fernando

Fernando walks several steps ahead, his short brown ponytail swishing. He waves his arms: “Come on, girls!” We fall into a single line on the moist terrain, four birds in tow.

The tour concludes at a family-run El Tuito restaurant. Fernando confers with our young server, the proprietor’s daughter, whose shy smile betrays amusement over our group’s limited grasp of the Spanish language. We order beef machaca with eggs with tortillas, salsa, and Pacifico beers all around. Fernando chooses eggs with locally made panela cheese. We raise our eyebrows at the lack of peppers in his dish. He laughs. “I know,” he says, smiling ruefully into his plate. “I’m a weird Mexican.”

Fernando teases us all the way back into the city, no longer a guide but a friend. We exchange contact information while saying goodbye. He has an evening tour to run before going home to his beagle, Leia.

Later that evening, we lounge in the pool. Our eyes savor the sunset; our limbs bob in the cool water. We are, for a short moment, unburdened. Soon, my friends will return to their jobs at the school where we met. They’re girding themselves for three weeks of in-service; I know, because I used to attend the compulsory monotony, too. As we twirl and weave through gentle waves, recollecting the day, laughing, and singing along to ABBA’s “Fernando,” I find myself wishing that this year will bring them to new heights in the areas of their lives that truly bring them joy: their creativity, their pride and rewards of work, their connections with high school learners.

I choose not to think about the fact that I won’t be returning to teaching with my friends. Instead, I’m reminded for the hundredth time of Emily Dickinson, my gap year muse: “‘Hope’ is the thing with feathers / that perches in the soul / and sings the tune without the words / and never stops – at all.”  Relaxing in the pool, still warm from memories of the day, I feel like I’ve just stepped into the sun after a long spell in the dark; my cells and spirit reunite, a small bird on wing. 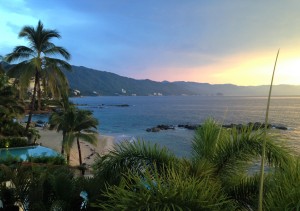