Lessons From The Big Easy

On February 2, 2014, I ran my first race: the New Orleans Rock N’ Roll Half Marathon. I traveled to the Big Easy with three girlfriends: Lori, who ran the race with me as a fundraiser; Casey, a frequent conspirator in food adventures; and Alethea, who drove from Georgia show her support. Though the run loomed prominently in our long weekend, so did our determination to find the best meals the city offered. What are four hungry ladies to do in the heart of Nola? Eat, and eat well. These are the abridged notes from a weekend I won’t soon forget.

The ghosts of Gertrude Stein and Alice B. Toklas, companions who famously toured the French countryside in search of culinary delights, lured us into the French Quarter the evening we arrived. We chose Acme Oyster House for our inaugural meal. Hopes high, we walked to the restaurant, located a short distance from our hotel, and assumed places in line for, what we were promised to be, “enormous plates of fried seafood.”  After 15 minutes of unsuccessfully garnering the attention of the hostess out front, our stomachs loudly rumbling, the hostess approached us, took our names, and led us past several other parties-of-four to a table by the bar. We did not question our good fortune. Hunger is a powerful condiment.

Our server, Will, a young L.L. Cool J, served me my first po’ boy: the Peace Maker, filled with equal parts of sweet fried shrimp and spicy fried oysters, and “dressed” with spicy mayonnaise, lettuce, and tomato. L.L. Adorable also brought us our first – but not last – hurricanes, oysters on the half shell, gumbo with rice, and dark, savory seafood étouffée, also served with rice. Lesson one: Enjoying a meal in a new place with friends is a joy. Enjoying a meal in a new place with attractive friends gets you seated faster.

Arrive early on Bourbon Street, because after a certain hour, the crowds thicken and traversing them can feel something like salmon swimming upstream against the current. We enjoyed more neon hurricanes in the cobbled courtyard behind Pat O’Brien’s, where music played, fountains flowed, and heat lamps and colorful lights warmed the nighttime bar crowd. We found a table in the corner of the courtyard. One of our neighbors promptly hit on Casey. He slurred his way through two introductions, only to seem to reconsider, apologizing to her and offering her his beads in truce. (His friends, only marginally less inebriated, eventually hauled him out of the bar.), Lori donned a newly acquired masquerade mask for the rest of the evening, laughing with her whole being as her hurricane shrank in her cup. We left the bar around 11 p.m. to find that an Egyptian-themed dance party had overtaken the block. I started to nervous-sweat and begged my friends to remove me from the Isis-fest. Alethea received beads – Thoth beads – before we got away, as well as an invitation to a “pimps-and-hoes-nipple-painting” nightclub.  The three who remained without invitation tried not to take umbrage. Education: Inebriated men give beads freely. Drunken, apologetic men take a little longer to part with their beads.

Hurricanes… and that one crazy who ordered a Bloody Mary instead.

Impressive… but still not Thoth beads.

At Laura’s Candies, off Chartres Street, two wizened shopkeepers informed us that pralines are pronounced “prah-lins,” like “naw’lins.” They encouraged us to share this knowledge with others. If only all lessons were so easily digested.

We made reservations for Saturday night at 6:00 at Commander’s Palace, the venerated Garden District establishment that nudged Emeril into the realm of culinary acclaim. We arrived by streetcar, with a cushion of time for allotted for exploring the neighborhood. As we roamed the quiet, tree-lined streets, admiring the architecture for which the area is renowned, we met a couple walking an enormous black mountain dog. G and P inquired about our attire (Commander’s Palace strongly recommends semi-formal dress), then pointed out houses of interest, such as the 24,000 square foot estate in which American Horror Story: Coven is filmed, and invited us to their home for after-dinner drinks. We felt giddy with possibility when we arrived at the restaurant.

Dinner at Commander’s Palace was everything we imagined… and more. Servers moved as elegantly as synchronized swimmers, clearing each course before delivering the next and coordinating their movements in unison, so that everyone at the table received their plates at the exact same time. Though Lori and I demurred from post-prandial libations chez GP, opting instead to rest prior to the race, Casey and Alethea joined the couple and had a famous night. They slinked back into the hotel room just after 2 a.m., buzzing with stories to share when we awoke. The take-away: Not all strangers want to stuff your pistol-whipped, half-mutilated body up their chimneys.

By race day, I suspected that the run had become ancillary to our epic meal docket. Nevertheless, we completed the race: Lori radiant with exuberance; me, hell-bent on finishing despite the searing pain in my right knee. I marinated in sweat and wrapped myself in a foil blanket like a sea bass ready for the oven. We hailed a cab. Kismet winked at me: our driver had two first names, a quirk I find endearing. Gary Albert (or was it Albert Gary?) enchanted us with tales of his six former wives and 15 children (all fictionalized) – a welcome distraction from sore muscles. I would have loved to sit with him, memorizing his deep, rolling drawl and seaside swagger, if only the fare remained static per quarter mile. Note to self: Find less expensive over-sized personalities to talk to.

Lori and I ran to support this very deserving young lady.

While Lori and I cleaned up post-race, Casey and Alethea sought out snacks to tide us all over before a late lunch.  They found luck at Café Beignet on Royal Street, where one can purchase a trio of beignets (they are typically sold in threes) for $3.99, including tax.  Beignets, the state doughnuts of Louisiana, are squares of choux dough, which blister and puff while deep-frying in oil and are sprinkled with powdered sugar immediately prior to serving.  The powder explodes in flurries with each bite. Over the next two days, we visited the café several more times, leaving small avalanches of sugar in our wake. Lesson: If one beignet is good, three is better. 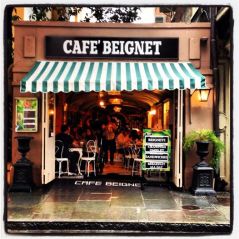 You had us at beignet.

During our brief time in New Orleans, we also ate at Ernst Café (killer fried green tomatoes), the Green Goddess (truffle cheese grits, sweet potato biscuits, and a bloody Mary sufficient to make a girl swoon), Domenica Restaurant (thank you, GP, for securing our reservation last minute on a Sunday night!), and the Ruby Slipper Cafe, where we ate our last New Orleans meal prior to leaving. If we’d arrived ten minutes later on that Monday morning, our wait would have quadrupled: the line only lengthened during our meal, a testament to the quality and reputation of the institution. At the Ruby Slipper, “there’s no place like home,” a philosophy that appears on their walls and menus alike. Maybe that’s why our Irish coffees felt so invitingly warm on that brisk gulf city morning; or maybe it was the service, true to our every experience in New Orleans: honest, easy, delicious, and so very genuine.

The view from Green Goddess.

Many, many thanks to Alethea, Casey, and Lori (and Maggi!) for sharing their photos in this post! When’s our next food adventure?