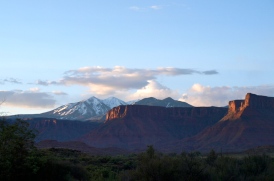 Finding inspiration in the La Sals and the red rock faces that surrounded us.

Work in Progress (WIP) is an accounting term that represents the value of the components of a product or idea in mid-production, items and materials not quite finished but necessary for a product’s completion. In the construction of a home, for example, WIP accounts for the inventory of nails, screws, hinges, drywall, and lumber that eventually become finished rooms. In writing, drafts are the WIP that wait in ‘inventory’ for their time to galvanize into completed essays.

At the end of April, I had four WIP pieces saved on my desktop. I also had had enough with my glitch-ridden computer, which had been operating strangely for some time. I took my laptop to be repaired, hastily transferring my files to a USB drive in the dark hours before my children awoke for school. A technician removed and reinstalled the operating system, thus restoring efficiency to my writing tool of choice. However, when I returned home, I realized that I hadn’t copied the WIP documents. Pre-dawn, pre-caffeine, my mouse bounced between two windows and highlighted the wrong files to transfer. My WIP essays were gone. I stared at my desktop and tried not to cry.

I tell my middle school students that words are just words: they only have the power that we give to them. Following Faulkner, I advise students that they must never hesitate to “kill their darlings,” and should look at their writing instead as a process toward reaching even greater literary heights. Revise, revise, revise! Don’t fall so in love with your words that you lose the ability to write harder, better! Yet, confronted with a loss of my own short-sighted creation – so many hours of drafting and research – what I would have given to see my precious darlings again.

A long-awaited trip to the outskirts of Moab, Utah, with three peers and 21 students wrenched me from the scene of devastation. We could not bring technology with us. It felt almost like a relief to put my computer out of mind for a few days, and focus instead on being a participant rather than an observer.

For the next few days, our group slept in tipis. We hiked, read, sloshed, played, and explored. Four sopping, scrambling teenagers fished me out of class three waves when our raft entirely and epically wiped out. I began to recover small bits of the ideas I’d lost and imagine new ones. The red rocks that surrounded us advised me to be strong. Coyotes yipped nightly salutations, while, by day, lizards suggested idyllic boulders on which to lounge. I wiggled my toes in the ruddy clay creek and the wind roared its approval. Cottonwoods applauded as I played in the sand. The desert revealed a much larger work in progress.

I came home to a blank desktop, opened a new document, and started to write.