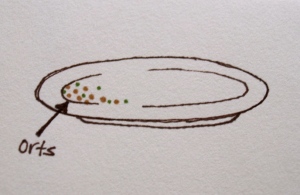 Ort: Noun. A scrap or morsel of food left at a meal.

Recently, I accompanied two other faculty members and our entire class of 17 middle school students to a 255-acre outdoor learning center called IslandWood on Bainbridge Island, Washington.  We spent three activity-driven days, exploring the island’s lush forests and challenging ourselves to learn from the natural world.  We hiked a lot and sampled native plants, such as stinging nettle leaves and salmonberry blossoms.  We spotted wrinkly, orange-bellied newts and thumb-sized green tree frogs.  We listened for the chipper call of the bright yellow American goldfinch, the state bird of Washington, and picked up a few songs to carry home with us, among them “The Ort Report”– arguably the most memorable tune we learned in our time at IslandWood.

I had never heard of an ort.  I certainly had not given much thought to tiny scraps and morsels prior to learning “The Ort Report,” which we sang after every meal served in IslandWood’s spacious dining hall.   Here are the words to the song:

Ooh, ahh, the Ort Report,
I said a-ooh, ahh, Ort Report,
Jiggy jiggy jiggy.
(Repeat twice, and don’t forget to swish your hands in the air during the jiggy part.)

The song’s mission is simple.  It introduces visitors to the concept of eating “just enough” – not so little that one is left hungry, nor so much as to prompt the loosening of any belts – and leaving fewer orts on our plates.  Though most of the students visiting IslandWood with us were fourth and fifth graders, who, because of their age, might be more prone to giggling, even our middle schoolers couldn’t camouflage their goofiest, lopsided smiles when we sang the song. That is brilliant marketing.

Not that the IslandWood dining hall markets anything except reduced food waste.  We ate family-style, each table served by a “captain,” who fetched heaping bowls of food from the kitchen and brought them to the table for us to share.  Once everyone received the first round of platters, Deborah, a tall strawberry blond who facilitates dining room affairs, encouraged anyone still hungry to claim second helpings.  IslandWood welcomed us to eat as much as we pleased, but issued gentle reminders – through Deborah – to eat “just enough,” so that we weren’t sluggish and inobservant in the field.  After meals, we sorted our plates according to food and liquid waste, compostable matter, and dirty dishes.  Deborah and a rotating group of student helpers then weighed the food and liquid waste, and revealed the findings to the diners, prefacing their announcement with “The Ort Report” song.  We (in all, roughly 200 visiting students and teachers from four schools) wasted about ten pounds of food and liquids after our first meal.  By the end of our short visit, we’d lowered our waste to two pounds.  Brilliant.

Deborah also taught us a lesson in fractions, whittling down an apple to a sliver of 1/32nds.  The apple represented the earth.  The sliver: the portion of the earth available to grow the overwhelming majority of foods we enjoy today.  Deborah prompted us to consider how much food gets tossed into the trash, un- or half-eaten, each day… at schools, restaurants, hotels, hospitals, airports, and in our own homes.  I can’t speak for others, but seeing that tiny apple sliver in Deborah’s slim fingers profoundly reinforced the notion of leaving behind far fewer orts.

Several of the middle school students returned from the trip with an interest in changing food practices in our own dining hall. They serenade me with “The Ort Report” in class.  Their smiles and laughter remind me that it’s not too late to decimate the ort population and stop eating at “just enough,” even if it’s just a few of us making that personal choice.  I’d do almost anything to make their world a bigger, better, longer lasting place.  The journey begins at breakfast.

One response to “The Ort Report”