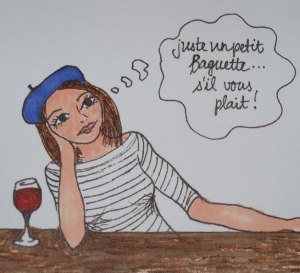 Peter Mayle lives in France and I do not.  He infects me with an acute and incurable case of Francophilia, and then he leaves me to fester away as he sips glorious rosé and saunters to his backyard swimming pool to cool his sunbaked skin.  Every day presents Mayle with an opportunity to observe the quirks and contradictions of the Provençal soul: every cheek kissed, every waggling mustache and gesticulating hand, every mais oui.  Mayle roams the idyllic countryside with his dogs.  He has uninterrupted access to baguettes.  Life is not fair.

Of course, Peter Mayle isn’t the first writerly person to succumb to the charms of France. Gertrude Stein, Ernest Hemingway, A.J. Liebling, MFK Fisher, Julia Child, James Villas, Adam Gopnik, David Sedaris, David Lebovitz, and Molly Wizenberg have also documented their love for France, so I shouldn’t hold Mayle solely responsible for my malaise vert.  Mayle believes that Provence has the curative power to relieve writers of the “daunting confrontation” of “the blank page.”  Mayle treats his own writerly “ennui” with “two or three hours of walking in the hills…  The happy combination of exercise, sunshine, solitude, and glorious scenery has such a tonic effect” that he returns to the work of writing with “renewed optimism.”  Even if I had the luxury of two hours in which to roam the plentiful hillside, which, incidentally, is crusted in deep snow from October to July, I doubt the solitude would similarly inspire me.

The true source of my frustration isn’t Peter Mayle.  I too would be on the first plane to France if I had the motive and financial wherewithal.  I am frustrated by the limits of my imagination.  Writers are told to write what they love, but I’m discovering that love only stretches so far.  Writers need stimulation: opportunities to observe, interact, and experience things.  Geography also plays a critical role in the interpretation of one’s days.  I live in the high desert of central Utah.  Though the area is classified as “desert,” I am surrounded by mountains that are lush with alpine vegetation and animals hardy enough to thrive at high altitude.  The snow-capped mountain crags are breathtaking; the fierce pink sunsets cast rose-colored rays over the outlying alfalfa fields.  I suffer no shortage of natural beauty.  But I write as Eater Provocateur, not Alpine Provocateur.

Mayle’s total love of place, character, and history ensures that he writes what he loves and, moreover, he lovingly writes.  If a Provençal acquaintance so much as utters a stray zut, Mayle captures it, rendering the moment in smart, engaging prose, like an anthropological rhapsody.  He embraces “big” personalities; they are the characters that bring brilliant color to Mayle’s writing.  There is Ramon, the plasterer, who drinks a succession of beers as he lies on his side, refinishing the ceiling.  There is gruff Massot, whose distaste for German tourists borders on obsession.  There is Monsieur Gu, “a genial, noisy man with the widest, jauntiest, most luxuriant and ambitious mustache [Mayle has] ever seen.”

My passion is food, and I do sometimes struggle with where I live because of limited access to quality ingredients and larger grocery offerings.  I get especially cranky about three ingredients: fresh mozzarella, Brie, and baguettes, and this is where Peter Mayle enters my web of frustration.  I realize that I can make my own mozzarella and, should the baking gods ever grant me their favor, baguettes.  I realize that these three foodstuffs have relatively short shelf lives, decreasing their potential to raise my grocer’s profits.  I realize that it is pointless to fight the palates of the majority when clearly I am the single person who comprises the minority.  I nevertheless feel like it is a sin that there isn’t easy access (i.e. less than a two-hour drive) to these three basic delicacies.  I bet Peter Mayle can procure these within minutes of his Provençal home.  Therein lies my indignation.

My family moved to central Utah four years ago, lured by careers in education. We became quickly ensnared by our love for the students at the school where we work.  Relocation is not an option at the moment, so despite my epicurean complaints, I must abide by the area’s constraints.  To be grudgingly honest, I value our location for its safety and moral fortitude.  My children are cocooned by this relative isolation.  They will grow up with memories of camping, hiking, and skiing; they will have knowledge of wide, open spaces and a healthy respect for nature.  We live each day surrounded by resplendent Rocky Mountain glory.  But, oh, what I wouldn’t give to inhale the salty, doughy scent of a freshly baked baguette, to rip apart that lovely bread flesh.

Mayle counters: “For more lively inspiration there is the café, a paradise for observers and eavesdroppers… There is an ever-changing visual accompaniment, since conversations are decorated with nods, winks, shrugs, moues, and expressions of astonishment or outrage, often with minor explosions of even more dramatic body language.”  This would be much more fruitful fodder, but, alas, where is my bustling café here in this Utah valley full of predominantly non-coffee drinkers?  Where is my Didier, my Faustin?  Where is my Massot, “chewing at his mustache in vexation”?  I adore colorful, oversized characters; I revel in their light like an enraptured moth.  I also have this weird, superstitious, personal rule not to write about the people in my immediate social circle unless they give me express permission to do so.  (It helps ensure that they remain my friends.) And so, I search for characters in the outer world.  I befriend farmers, grocers, and gardeners, but the pace is slow, the personality rewards subtle.  The law of averages delivers its harsh decree.

The other night, after a particularly painful bout with my ailment (roughly 60 pages into Provence A – Z), I dreamt that I was traveling in France with my friend, Casey. (Casey has enthusiastically given me permission to write about her, affirming her consent by saying, “It’s about time!  I thought you’d never ask!”)  A horde of young French schoolboys descended on us, each wearing matching outfits and chic red scarves tied around their necks.  They separated us.  I lost sight of Casey.  Unable to fight against the press of the crowd, I matched their brisk pace and found myself in the home of a bushy-haired Frenchman.  I instinctively knew that he was a photographer.  He sat at a table in the center of a large storeroom, drinking wine, a cigarette dangling from underneath his full, salt and pepper mustache.  Edith Piaf warbled from a small radio by his side.  “Excusez,” I said, immediately recalling David Lebovitz’s etiquette suggestions for visitors to France.  I began again.  “Bonjour, monsieur!” I said, flashing my brightest smile. “Ça va? … Er… Excusez-moi, mais je….” I devolved into tearful English as I explained I’d lost my friend.  What should I do?  The photographer disappeared momentarily behind his plume of smoke.  He reached behind him, pulling out a plate of cheese and pushing it towards me on the table.  “Seet, chèrie,” said the man, his eyes twinkling mischievously.  “Eat.”

Postscript – Lebovitz’s book, The Sweet Life in Paris, is an excellent (and very funny) preparatory read for those embarking on a trip to the city of love and lights.  If, on the other hand, it’s the southern French countryside for you, go with Mayle’s Provence A – Z.

One response to “Vive la France!”