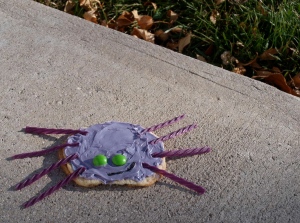 Something creepy this way crawls...

During the week, I work as a writing tutor for a rotating group of high school students.  This group also includes a slightly younger pair of siblings: Stella and Lucas, age 12 and 10 respectively.  Stella’s former teachers in the San Diego school system had encouraged her to explore creativity through writing; the writing program at her new Utah school simply wasn’t compelling enough to sustain her interest.  I think that Lucas, a redhead with a sprinkling of freckles and a shy smile, joined our tutoring sessions to see if his interest could be similarly sparked.  We sit together for hour-long sessions at my large dining table and work through free writing prompts and language-building activities.  I write with them, and we share our writing round-robin style.  Stella and Lucas laugh with each other, making faces.  They reference each other in their writing.  They are the highlight of my workweek.

Last week, we wrote Halloween haikus, illustrating them in the margins with spooky characters. Frankenstein appeared in all three of our lists of Top Ten Things Related to Halloween.  Stella and Lucas’ faces furrowed with intent as they sorted through the box of markers I gave them; they wanted to make sure that their Frankensteins were just the right shade of green, his scars in the exact right placement.

Here is one of our resulting haikus:

If Frankenstein ate
candy he might not have been
in such a bad mood.

Here is one of mine:

Shaving cream egg bombs
they tossed from the bus windows
and freaked my mom out.

A shaving cream bomb and an egg bomb comprised only a small portion of the Coney Island Halloween experience between the years of 1984 and 1992.  An egg bomb is a raw egg pitched at high velocity from moving buses, apartment windows, and random passersby on the street.  A shaving cream bomb is a rock loosely encased by a blob of shaving cream, thrown with similar speed and intent.  I never received a shaving cream egg bomb firsthand because my mother barricaded us inside the apartment for the entire day, but the evidence was plain to see on November 1st.  Egg artilleries imploded on the sidewalks, shaving cream napalm smeared against buildings, pebbles scattered like shrapnel.

Corn mazes, hayrides, bobbing for apples, and bonfires were not commonly practiced.  Trick or treating was not encouraged.

The act of donning a costume for public appearance is referred to as ‘guising’ after the verb ‘to disguise.’  My mother disapproved of dressing in costumes at Halloween; she thought it wrong to celebrate ghouls, ghosts, and creatures she associated with the occult.  I know that she let me dress up at least once because she documented it in her journal: I was a black cat.  In college, I guised as a piece of jail bait, a nun, a witch, and a demonic vixen, selections that accurately mirror my social experiences during those years.  This year I will guise as myself, which is perhaps the most illusory guise of all.

Tricks are essentially implied shenanigan threats, translating to “Give me candy or I’ll toilet paper your rhododendron.”  In some parts of the world, however, children are expected to earn their treats by performing “tricks” like singing or telling stories, a quaint practice that I wouldn’t mind seeing more of.  Wouldn’t it make the day more fun to see a pintsized skeleton dancing a jig on my doorstep?  Or to hear my daughter belting out spirited renditions of musical numbers for my neighbors as we made our rounds?  What does it say about a culture that submits to the threats of children with the reward of candy, and has even sanctioned a national holiday in celebration of this implied trickery?

Then again, few children seem to know the more mischievous nuances of the term ‘trick.’  Lucas didn’t, but he laughed when I told him about the singing and dancing alternative.  Many of the children who knock at my door omit the phrase altogether; they thrust out their buckets and bags, mute but with expectant eyes.  I wonder what they’d think if I asked them to sing me the SpongeBob theme song.

I’m not actually a Halloween crank.  The holiday endures because it’s fun to dress up and it’s even more fun to go on a raging sugar bender, as is evidenced by the extraordinary candy revenues reported in the days leading up to Halloween.  The Washington Post estimates that 90 percent of parents steal treats from their children’s sugary schwag.  (Lucas frowned when I shared this statistic.  Stella giggled.)  I admit to furtively savoring my ill begotten Skittles and Nerd Ropes. I try to remind myself that my history is not my children’s.  My kids will recall the chill of the night air, the anticipation, and the sweet rewards.

This year, Kai opted to be his hero, Spiderman, and my daughter, Rory, will be Ladybug Girl, resplendent with black fuzz ball antennae, shimmering red wings, and a gauzy tulle skirt that I handmade in one of my rare fits of crafting.

Our lights will shine through the windows on Halloween night.  I will gladly open the door.