Boulder hills of Navajo sandstone, home to small piñons, juniper, wiry grasses, and cacti, overlook the Muley Point rift and the San Juan River far below.  A cold wind blows; dust obscures Monument Valley in the distance.  My head swims, though I’m more than six feet away from the edge of the rift.  My pulse soars.  The familiar vertiginous bottoming-out sensation descends and my legs threaten to buckle.
“Dad, I’m gonna toss lunch if I don’t move back more,” I warn. My father chuckles, steps sideways, flourishing his arms as I pass, and continues to share his musings on macabre and sensational ways to die.  I scuttle awkwardly away from the edge, trying hard to control my movements, inch by inch, and don’t stop until I’ve gained about three more feet.  I inch further back each time I try to get a photograph, because the process of raising the camera and clicking shifts my sense of balance.
The views are stunning, despite the dust: a striated red rock face, dropping to sharply incised gorges below.  I feel as if I’m standing at the edge of the world.
My father tells me that his mom suffered from an intense desire to throw herself from ledges, a compulsion she battled constantly throughout her adult life.  I experience the exact opposite: I suffer from an intense desire to throw myself onto the ground beneath my feet and, ideally, sprawl out bodily on a horizontal surface.  My most frequent recurring nightmare is that of plummeting.  But it wasn’t always this way.
*
I spent my summers in the West with my father and my grandparents; I lived in New York with my mom and sister for the long remainder of the year.  New York challenged me to revise my perception of place, tricking my mind to make canyons out of long stretches of skyscrapers, to cherish the small beams of sun that peeked through in-between spaces.  I took brisk walks along the piers of the East River, the smell of it cold, dirty.  I had Paddy Reilly’s around the corner, where I spent the nights, drinking and smoking and being jostled by inebriated, joyful, and sometimes vicious young Irish men, the sounds of Black ’47 deafening and thrilling in my ears.  The sand-colored walls of the Met buoyed me as I studied antiquities and the fine lines of art through the centuries: Rodin’s lovers, Picasso’s portraits of women with bodies like fingers clutching their organs. Outside the horse carriages clopped along, the air saturated with the smell of franks and hot pretzels from vendors, who rarely spoke English or spoke at all, just exchanged money for product and nodded.  Every year, the lights on the gigantic Christmas tree at Rockefeller Center overshadowed Prometheus’s golden perch above the ice skating rink, all bright lights and trumpeting white wire angels.  People with red noses, bundled in flimsy but fashionable coats, pressed along without making eye contact.
I loved New York but was not part of it.  I looked out my high-rise, barred windows at night, numbed by the brake lights of the traffic on Second Avenue, tamping down a rising sense of distress.  I loved the fact that a one-hour ride could deliver me to the Atlantic coast, where there were arcades, Italian sausages, grumbling Russian Mafioso.  But I dreaded the storms of winter, which stalled the trains for hours on end, and the men I met who made me feel pretty one day, worthless the next.  Fat rats sidled over the subway tracks, sidewinding with garbage trophies in their mouths.
I know I was not the only person to contemplate suicide in the black tunnels of the New York underworld, to imagine stepping off the tracks into the bright lights of an incoming train.  One day, having thought about making that quick fall one too many times, I shrank against the subway’s filthy columns, steadied my breath, and experienced the rare moment of perfect clarity that directed me to leave New York, rather than leave life itself.
Nothing changed the day I left.  New York City remained just as magnificent: the tall, wondrous skyscrapers hazy and ephemeral – a tall, opalescent fortress of distilled green poison, sweetened by a single, sickly, unrelenting cube of sugar.
*
Memories shudder randomly into moments of realization. My father, who has brought me to Muley Point on this cold spring day, has always led me into the desert: together, we explored washes, rutted washboard dirt roads, back trails, and so many beautiful rocks, small to immense.  We picnicked amidst rounded orbs of sandstone, a warm heat emanating off the rocks, and with each summer I began to feel like a gecko, tiny and leopard-speckled, basking in the sun.
As I stand on the sandstone with my father now – his wizened, bright blue eyes twinkling; white mustache twitching thoughtfully; outfitted in his standard attire of weatherworn wide-brimmed hat, plaid shirt, holes gaping in his faded pants, and dusty work shoes – I realize the force of place.  I felt powerful urges to leave New York, but every cell in my body sings to propel me into the desert.  My sense of displacement and distress dissolves in the desert’s fine dust; the sickly, nebulous green assumes the sharpness and clarity of sage and fragrant desert brush.
In my teens, driving eastward from Mexican Hat into Bluff with my father on a leaden summer day, I caught sight of a lone sunbeam illuminating the warm, golden sandstone, the sky otherwise thickly and ominously gray.  The sight of it imprinted on me forever. 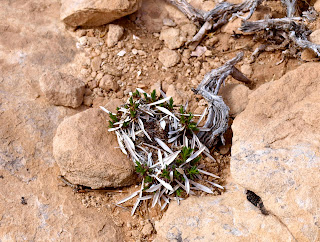